The Cake Table of Dreams at Howsham Hall….

First things first!! THE cake table at Sonia & Matt’s wedding… was the most spectacular that we’ve EVER seen. We strongly believe that Sonia (successful solicitor) should give up her day job to become a wedding stylist. Sonia created a design with floral geniuses Leafy Couture and fabulous cake designers Zoe’s Fancy Cakes (wedding cake) alongside Three Little Birds Bakery. (cupcakes) to create the most magnificent display.

The day was excellent, with many guests reporting that it was one of the best weddings they had ever been to! We would recommend Dine to friends and family. 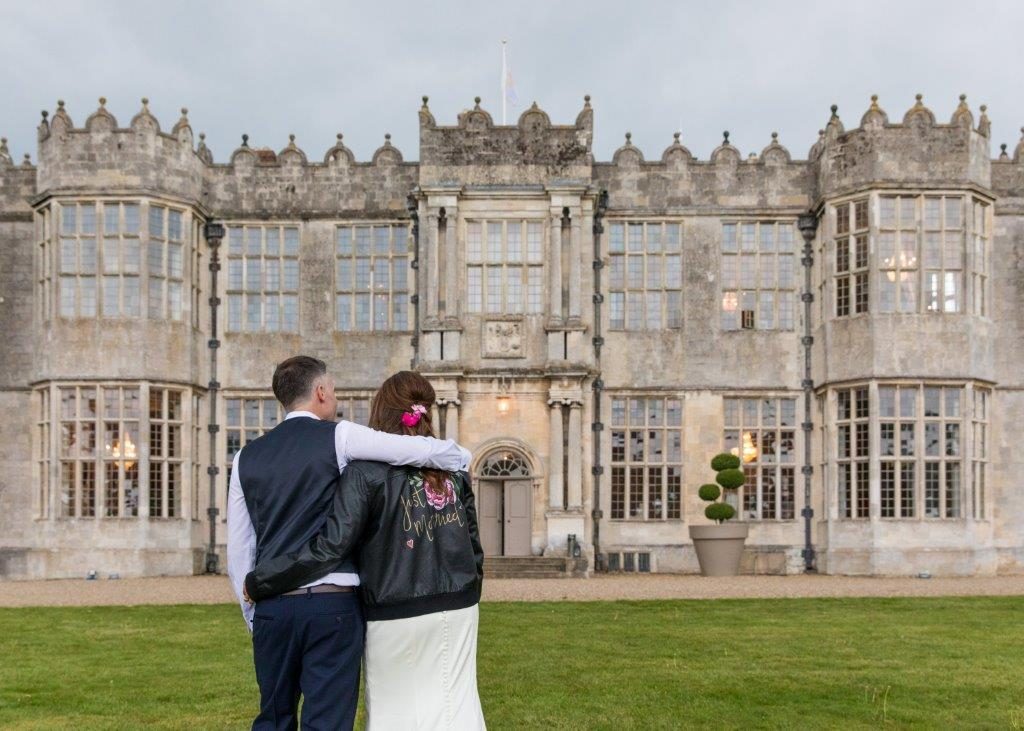 Sonia 31, Solicitor and Matthew 37, Sales Manager live in Leeds. This gorgeous couple met via Sonia’s sister, Reena, when Matt and Reena worked together at McArthur Glenn in York.

Sonia and Matthew tied the Knot at Howsham Hall near York, in The Great Hall, with all of their family and friends. The event took place on Saturday 18th May 2019 – 10 years to the day since they first started dating.

The proposal came from Matthew in Santa Cruz in Tenerife at Sonia’s Dad’s place, just 18 months before the big day. Matthew described the proposal as a “complete disaster”, but later admitted, although it hadn’t been quite as he’d hoped, it was actually very private and lovely in many ways. The couple took a stroll near the ocean… Matthew was very nervous, to the point that Sonia thought he was unwell. Matthew finally mustered up the courage to pop the question and Sonia joyfully accepted. Sonia’s ring was later purchased from an LA based company that ethically sources (cultivates) diamonds called Vrai and Oro.

Their journey with the Dine team began in January 2018, when Sonia got in touch to come and see Howsham Hall.

This is what they chose for the celebration meal:

There was also a children’s menu and warm sandwiches served in the evening. 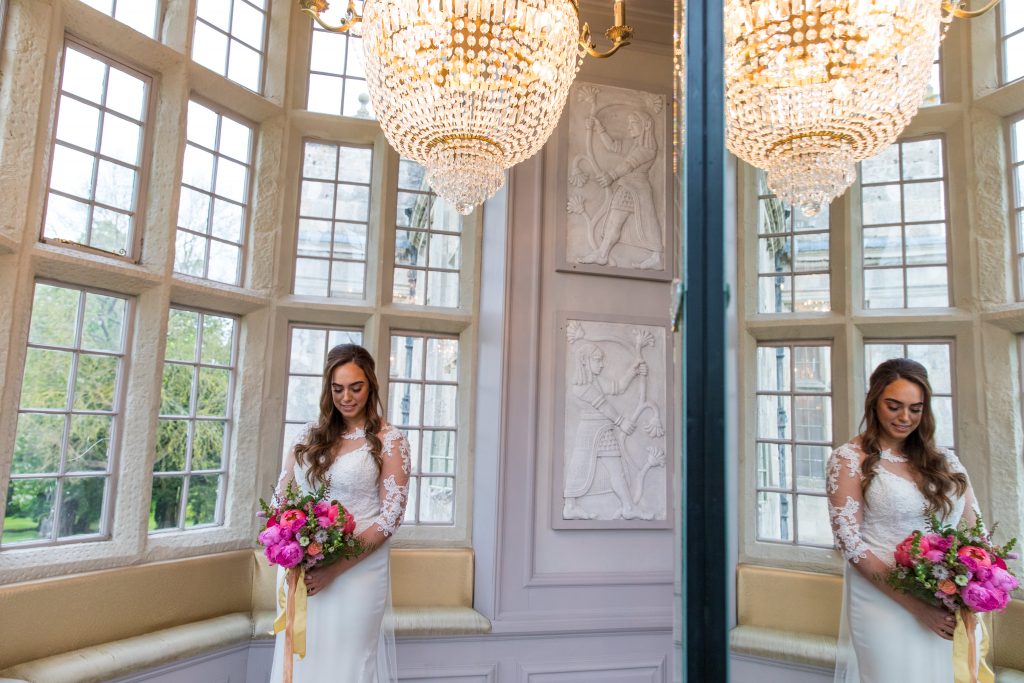 The cake was by designer, Zoe’s Fancy cakes, with different flavored tiers – chocolate orange, elderflower and lemon and vanilla and raspberry. Three Little Birds Bakery also contributed some beautiful cup cakes to the display and made macaron favours, which were an absolute delight and were very well received by guests.

Flowers were by Leafy Couture. 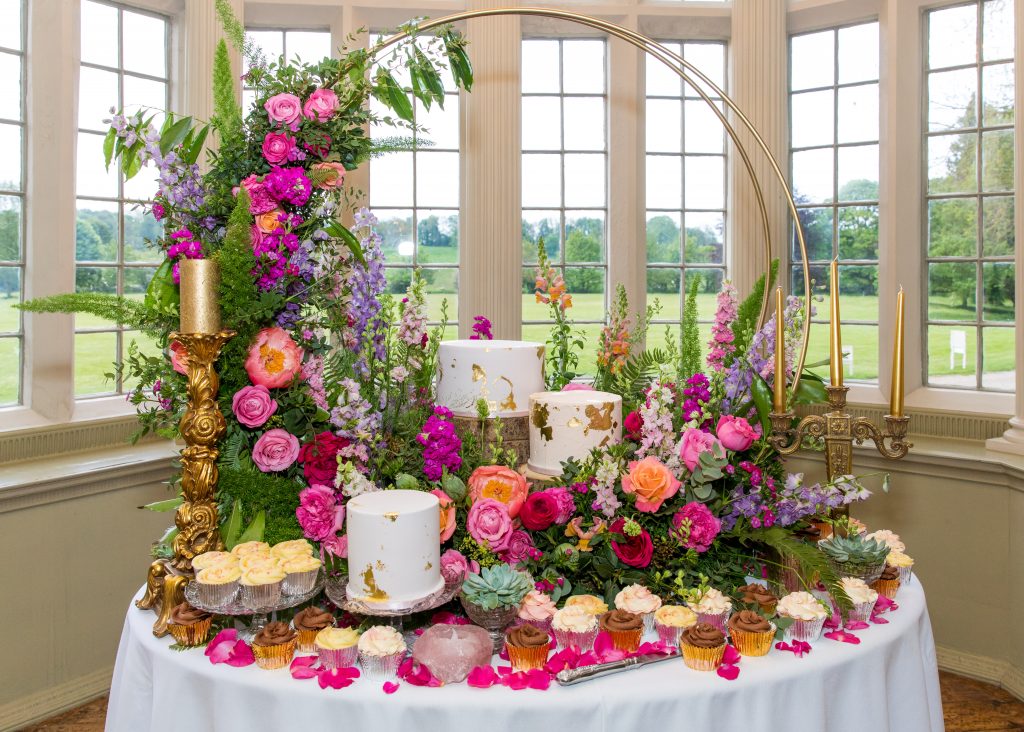 What did the groom wear and where was it from? 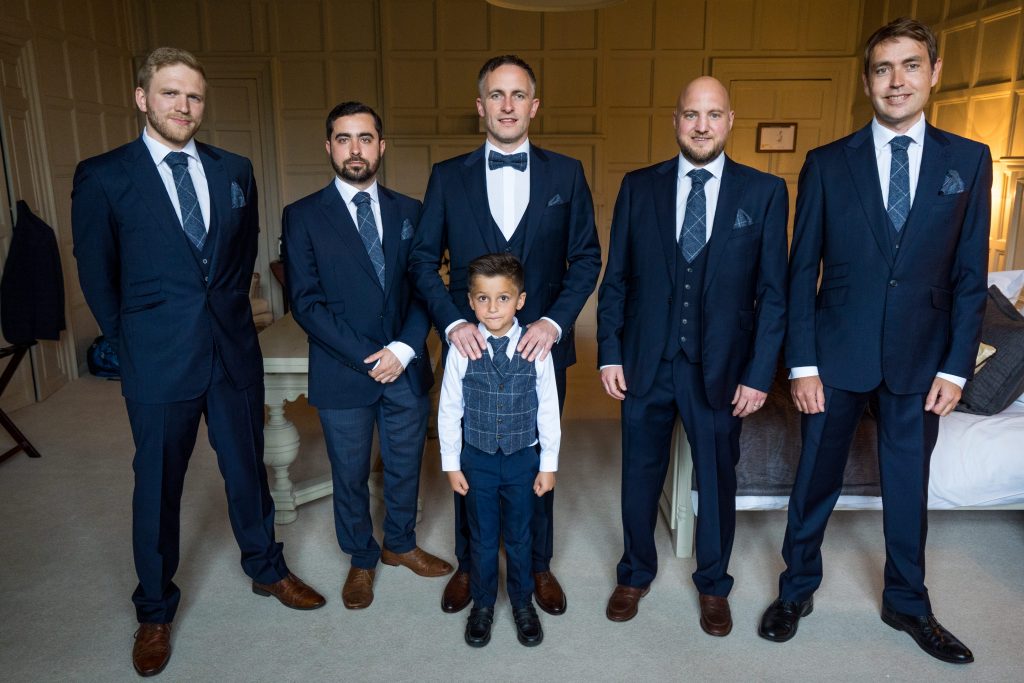 Hair was done by Emily Hawkes and makeup by Kate Spreckley. 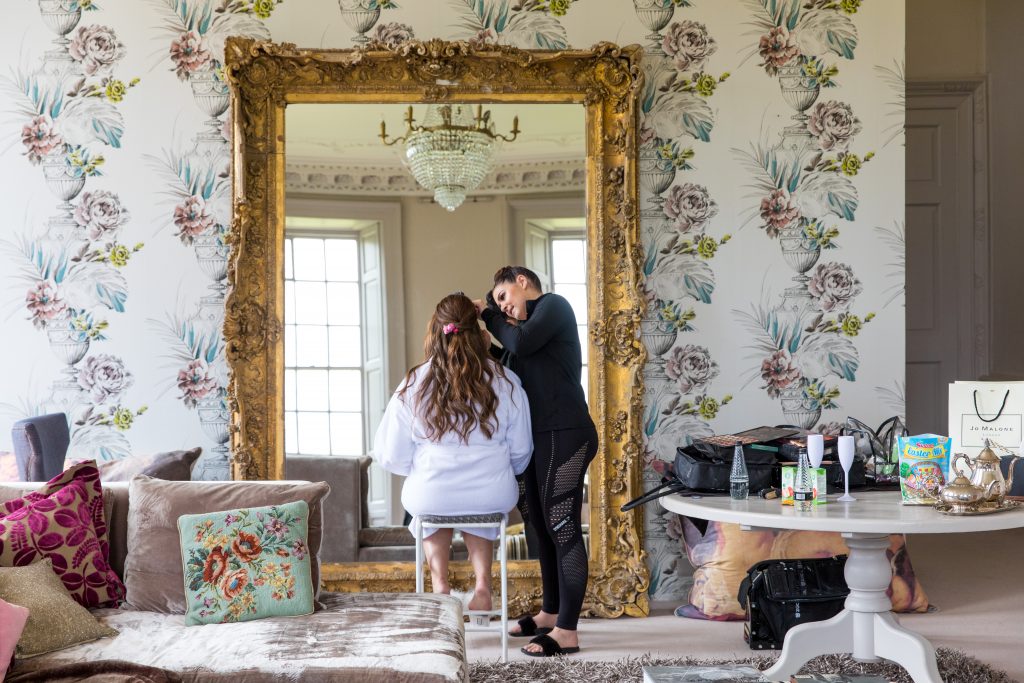 “Seeing Sonia walking down the aisle and the ceremony. Speeches were wonderful.  We have the most tremendous wedding video by Pat Holt.” 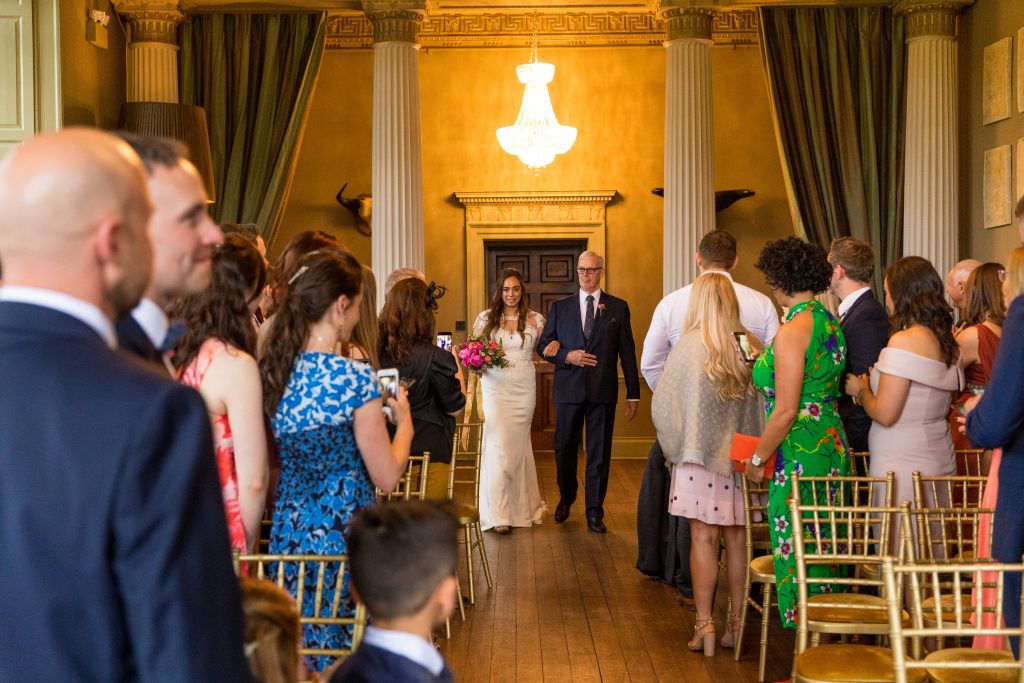 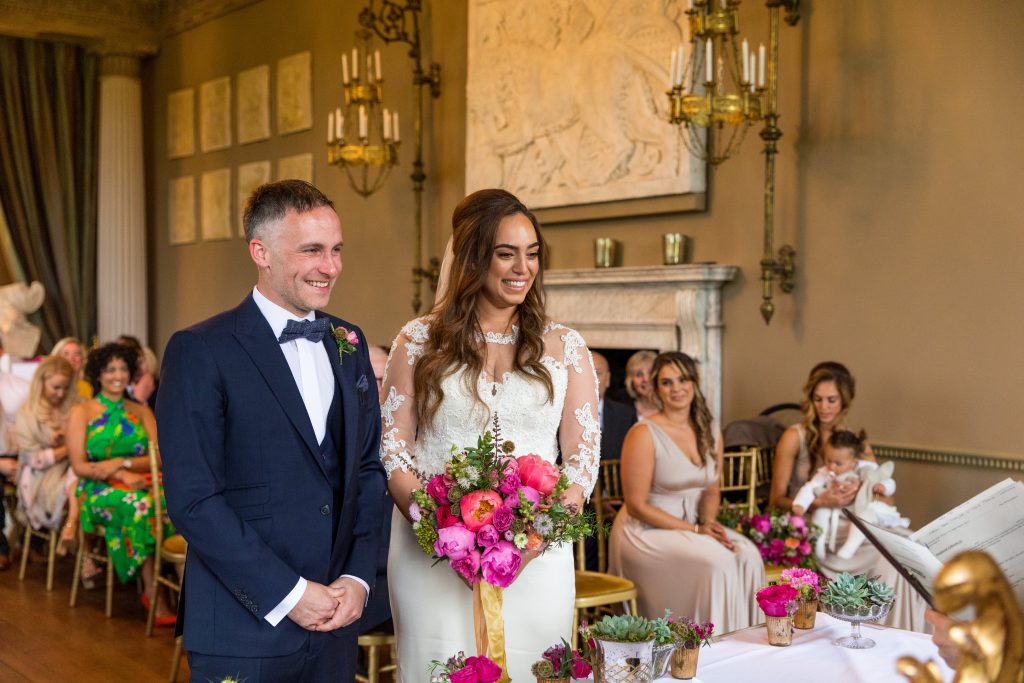 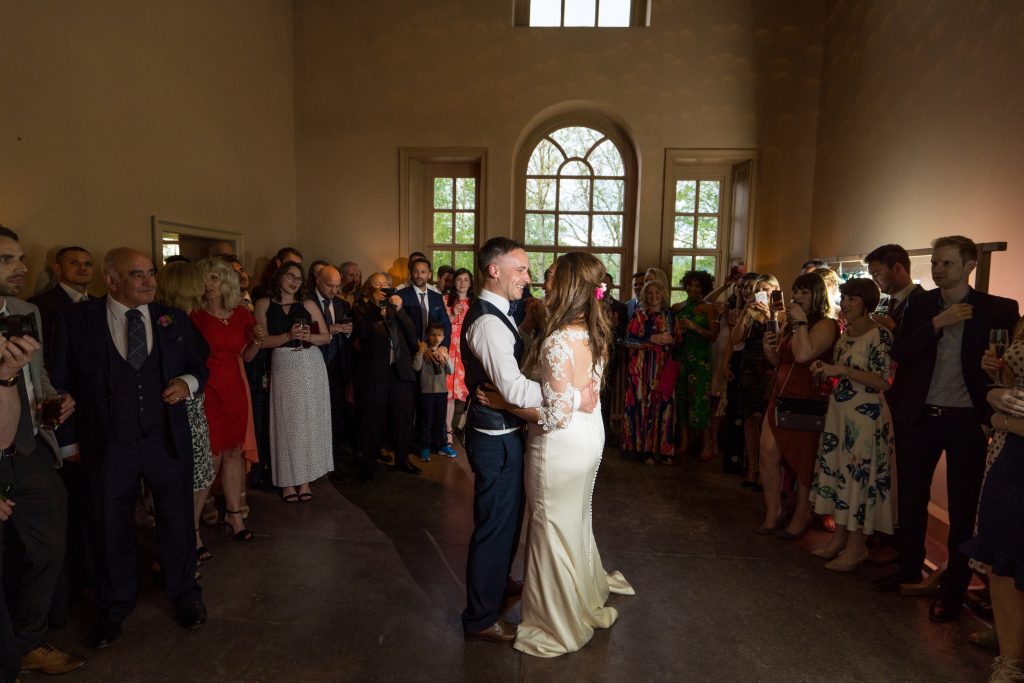 Jonny Ross  supplied Ibiza style DJ with Sax player. Also had Joe Alexander Shepherd on piano. Sonia discovered Joe when he was playing in Leeds train station. He’s since been signed by a record label. Sonia walked down the aisle to his debut single, Time. 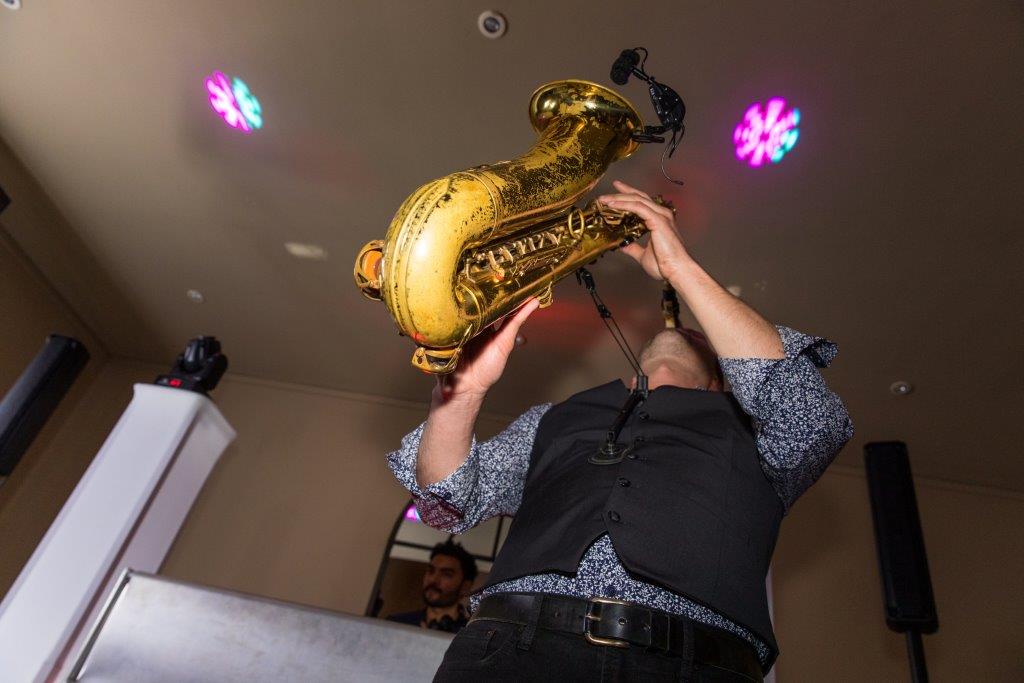 The couple wrapped up celebrations with a heavenly honeymoon in Mauritius at the Belle Mare Lux hotel. 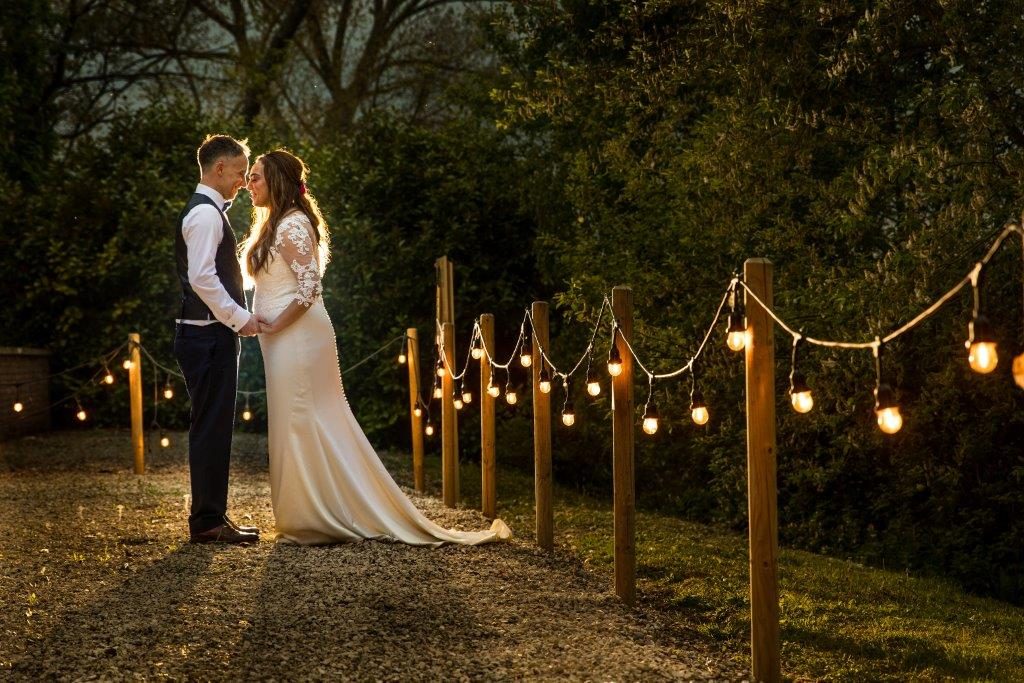 Chris Thornton photography kindly supplied us with the images from the day. Fabulous wedding photography – he got some really stylish shots.