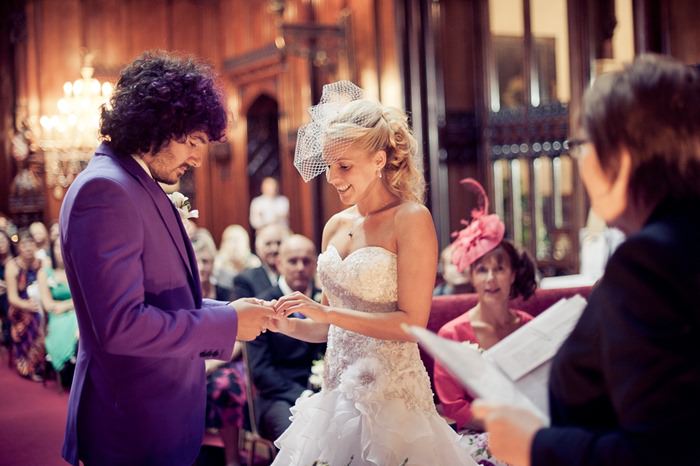 With images by  Laura Calderwood.

Alice says: Gareth asked me to marry him at home in front of our log fire on Christmas Day 2012.   We got married on Thursday 22nd August 2013 at Allerton Castle.

We spent hours scouring the internet and found a few venues that looked great. We viewed a couple and were not overwhelmed. However, as we drove into the grounds of Allerton Castle, we were immediately taken by the grand driveway leading up to the castle which remained out of sight until the last 100 yards or so. When it finally ‘appeared’ it was a moment we will never forget. Breathtaking. And set in beautiful grounds.  Upon entering the castle we were further impressed by the grandness of it all and the staircase was magnificent.

Lyndsey, at Dine, showed us round, talked us through everything, made us feel very at ease and reassured us that she was only ever a phone call away, something which she may have later regretted. We phoned her a lot!

My dress was Kenneth Winston Private Label by G.  I loved the detail on the bodice, the ruffles and the train.  Gareth’s suit was made by Leeds tailor, James Michelsberg – a bespoke bright purple suit with lilac lining. Our bridesmaids wore handmade chiffon dresses in lilac.

Every part of the day was incredibly special. It’s hard to pick one moment but the ceremony was very emotional (in a good way)!

Everyone stayed at the Days Inn, Wetherby, the night before and although some drove to the castle, the majority were picked up by a special wedding bus from The Yorkshire Heritage Bus Company.  Alice’s mum drove her to the castle on the day as her entrance was down the grand staircase so she had to arrive at the castle first. Gareth drove in a few minutes later with his best man.

The whole day was very special but the extra unexpected special touches included our caricaturist, Mike Bryson, who had the ability (and guts) to identify and accentuate everyone’s slight imperfections with great accuracy. The shock and laughter really brought everyone together.

The fireworks by Ferrensby Fireworks were incredible and well worth every penny. Interspersed with a well timed lightning storm (provided free by nature) they just kept coming getting bigger and brighter before culminating in a huge grand finale!

We decided to have a victoria sponge cake which stood proudly over 72 cup cakes (36 purple, 36 white) by Cupcakes By Charley. I made the cake toppers.  They actually looked a lot better on the cake than they looked in the kitchen the previous day!

Gareth wrote a song for me and performed it for her as part of his wedding speech. The song is called ‘My pot of gold’ and is available to watch on Youtube.

We work on cruise ships as ventriloquists and are in demand at the moment so have not yet had chance to go on a honeymoon but we are planning on going to Las Vegas for a few days and skiing for a long weekend, just as soon as we get a gap in the diary

My top tip is to enjoy every moment. It goes so quickly. Have fireworks in the evening but don’t tell anyone (apart from the firework providers of course)!